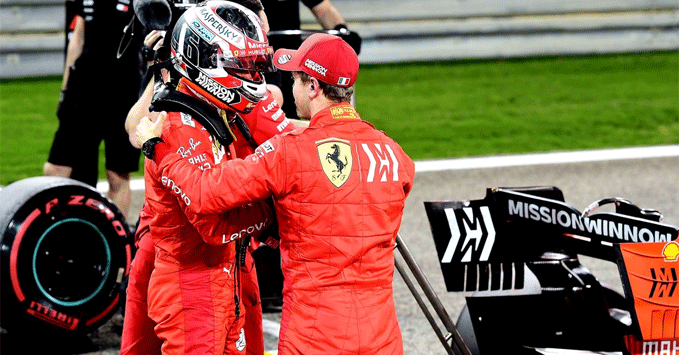 Former Scuderia Ferrari boss Ross Brawn believes that the Maranello team’s Sebastian Vettel is facing new problems at the Italian squad in 2019 as his woes continued with a crash with Red Bull’s Max Verstappen during the British Grand Prix. Having struggled to a secure a comfortable feeling and handling with Ferrari’s SF90 throughout this season, Sebastian Vettel’s difficult F1 campaign hit a new low at Silverstone as he collided into Verstappen immediately after being overtaken by the Red Bull driver.

Following a trip through the gravel trap and a 10-second penalty for causing the crash, Sebastian ended the British race down in 16th place – the first time the German driver has failed to score points since his home race last year – leaving the Ferrari driver 100 points behind F1 world championship leader Lewis Hamilton.

Ross Brawn, F1’s managing director for motorsport, feels Sebastian Vettel’s form has plunged since losing the Canadian GP to Hamilton due to his controversial time penalty and sees a new type of pressure mounting on the four-time F1 world champion with the continued rise of young teammate Charles Leclerc.

“It’s a difficult moment for Sebastian, as he probably feels under a different kind of pressure than he’s used to, and he must be asking himself what direction he should now go in, given that again this year, his chance of putting Ferrari back on top is slipping away. Since Canada, Sebastian seems to have been struggling more and more, and in Silverstone those woes deepened further. Unlike Leclerc, he never felt comfortable in the car, as can be seen from the gaps in qualifying and then, in the race, he didn’t make the most of the Safety Car opportunity, after it had seen him move up to third. Then came the mistake when he slammed into the back of Verstappen’s car. He realised immediately that he’d erred and after the race quickly sought Max out to apologise.” – he explained.

With Charles Leclerc claiming a fourth consecutive podium at the British race, the 21-year-old has moved to just three points behind his Ferrari teammate who had been expected to lead the team’s charge for the 2019 F1 title. Ross Brawn says Sebastian Vettel must lean upon support from Ferrari and regain his rhythm in the car to kick-start his current F1 campaign: “Sebastian is an incredible driver, as his record shows, but at the moment, he needs to keep calm and to rely on support from his team, which I’m sure he is getting,” he said – “I reckon there is no other team like Ferrari when it comes to surrounding its drivers with affection and positive energy.” – the former Scuderia Ferrari technical director concluded.