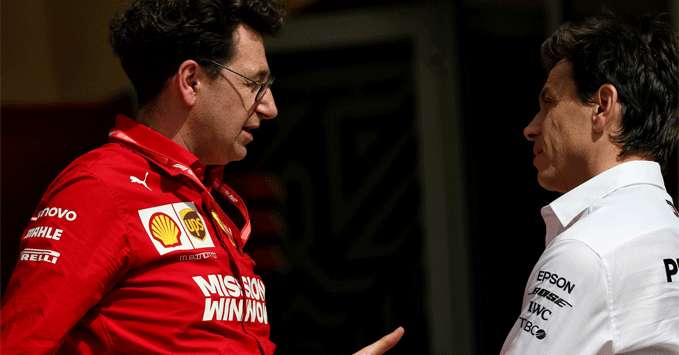 Mercedes Formula 1 boss Toto Wolff says he Sebastian Vettel is “absolutely right” to be angry about his controversial penalty in the Canadian Grand Prix.

The Ferrari driver beat Lewis Hamilton on the road to cross the line in first place but was demoted to second place after receiving a five-second time penalty for re-joining the track in an unsafe manner after running wide under pressure from Hamilton on Lap 48.

Vettel lost control of his SF90 car across the grass at Turn 3 before cutting back onto the track and shutting the door on Hamilton. He subsequent penalty prompted an angry reaction that included him swapping the position marker boards around under the podium in parc ferme.

And Wolff could sympathise with his display of passion, even if he felt the penalty was ultimately the right outcome.

“First of all, Sebastian is absolutely right, if it was me I would kicked the damn board and thrown it against the car,” Wolff told Sky Sports. Emotions are logic, and are good for the sport. And in all the typical decisions there is a controversial one. I am of course biased for Mercedes and there is a rule that says you have to leave a car’s width when you go off the track, and I think his instinctive reaction was that he had to protect that position, and maybe that was a tiny bit too far. If you’re a Ferrari fan, or somebody that is keen on seeing hard racing, you’d like to see a little bit more of a bumper car mentality. I was a bit surprised because I didn’t think that they would come up with a controversial decision but from a clear revelations point, they have interpreted what is black and white. The stewards are out there specially the race stewards, they need to be supported. There is Emanuele Pirro up there, and they don’t get much more professional than Emanuele. I think they looked at the incident and that needs to be respected.” – he said.

“In Monaco, Valtteri was pushed up against the pit wall, and I thought the 5 seconds [for Max Verstappen] was a bit lenient,” he said – “We didn’t complain about it, we just take it. Sometimes decisions go against you, sometimes they go in your favour. I think we all like hard racing,” he added. “If you touch sometimes that is the consequence. But I think that we need to rely on regulations and this is how we go racing and if we want to change the regulations at other races I’m the first one up for i – it becomes a little bit more dangerous and quite exciting but count me in.” – the Mercedes boss concluded.