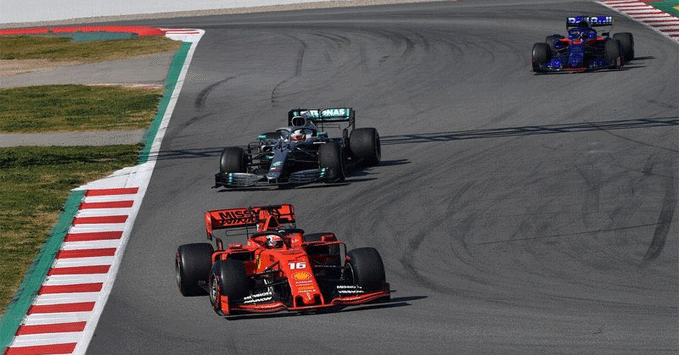 Scuderia Ferrari absolutely needed a strong weekend in Bahrain and the Maranello team have got off to the perfect start, as Charles Leclerc led a Scuderia one-two in first practice, finishing almost a second clear of the closest Mercedes with Valtteri Bottas ahead of Lewis Hamilton.

The Monegasque racing driver, in his first year with the Italian team, lapped with a best time of one minute 30.354 seconds, 0.263 quicker than Vettel, as the Ferraris set a scorching pace around the 5.4-km Sakhir desert track in the afternoon heat. Ferrari, tipped as pre-season favourites, were surprisingly slow in Australia but have the best record of any team in Bahrain with six wins from 14 races there.

While Ferrari looked to be back on form, the track conditions in Friday’s first session are not totally resentative of a race held in the late evening and under floodlights. However, as reported by the leading German automobile magazine Auto motor und sport, the GPS analysis at the end of the first practice session for the Bahrain Grand Prix did show that on the four straights, Scuderia Ferrari was 0.8s faster than Mercedes and Red Bull Honda, which indicates that the Melbourne engine problem seems to be solved, as the straightline speed looked a lot better than in Australia. Yet the data also showed that Ferrari is still struggling in slow corners, meaning that the SF90 is still carrying the slow corner weakness which compromised the Maranello team’s pace in Melbourne.