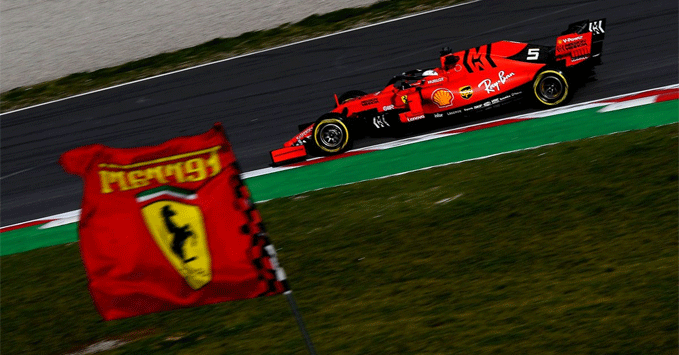 Ferrari’s 2019 Bahrain Grand Prix:
Michael Schmidt: In Bahrain Ferrari was where we expected them to be (like Barcelona) but it was specifically in one area where Ferrari was so much better than Mercedes and all the others: Ferrari were breathtakingly fast, in all four straights there were 0,4s faster. That can’t be explained just by Mercedes having a bit more downforce than them, as that could maybe make up for 0.1s but not more. And then there would still be 0.3s which most likely is just engine power.

Where is this coming from suddenly ? What is the trick? Are there rumors?
Michael Schmidt: Actually it has cannot come suddenly because the engines are sealed after Melbourne, so you can’t do much there. You can work a little with the performance strategy like how the energy is injected or you could change something in terms of fuel but we haven’t heard that SHELL has brought a new fuel specification. I personally think that Ferrari were bluffing in Barcelona. They knew how good their engine is (with more performance) but their package was already so good without that, so they didn’t even feel the need to show the full potential of it (why should they show their jokers so early in the game). In Melbourne they had massive problems with the engine which is why they couldn’t show it. As I said one time because they didn’t want to and one time because they just couldn’t and now in Bahrain it was the first time that they showed it.

How big are the concerns for the others (Mercedes/Red Bull etc.)? Is that a game changer for the rest of the season or can others catch up?
You could see that Mercedes celebrated their second double win more restrained than the first one because they know that they cannot just catch up to those 0.3s overnight. Today when it comes to the aerodynamic and the engines there are only small steps but 0.3s is almost a little world to catch up.

About Charles Leclerc’ engine problem:
Michael Schmidt: They told us that one cylinder failed and he only drove with five cylinders. Now there are rumors that a injector failed. That makes sense. When you only have five cylinders available you are missing 100-150hp. It makes also sense because he could drive until the end. If it was a massive problem e.g compression problem (when a piston ring is moved) then I doubt that Ferrari would have risked it and drove until the end because then the PU would be really destroyed. And getting a second engine in the third race is a bit too much. They will test the engine on Friday and see if there are any risks for Saturday/Sunday.

Sebastian Vettel with another mistake and he was behind Charles Leclerc all weekend long. Should we be worried about him?
Michael Schmidt: Sebastian should be more worried about the performance in the rest of the weekend than his spin. Strangely he wasn’t able to manage the car well in Bahrain. Charles Leclerc was happy from the start (he said that the car is still not as good as in Barcelona but much better than in Melbourne). Sebastian told me already on Friday that he is not happy with the rear. The rear is too nervous and he is missing the confidence in it. He has a very special driving style. He brakes and steers in the corner very extreme and normally he wins the time on the way from the brake point to the apex and he can’t do that when the rear is not “glued”. He never found the right configuration to drive fast.

Do you think this will be a problem over the whole season or could this be solved with some setup work?
Michael Schmidt: It should be solved with setup work and it also depends on the different circuits e.g. Shanghai has a more smooth layout and the characteristic that he needs is not required there, so it should be better in China even if he does not find the issue and a solution for it. But for example Baku is similar to Bahrain. I think Sebastian will use the whole testing day to setup the car so that he is satisfied with it.