Phillip Morris under fire for new logo on Ferrari F1 uniforms. Since 2007, strict controls on tobacco advertising worldwide have led to the gradual removal of the branding.

The new red and white uniforms worn by Ferrari’s Formula 1 drivers advertise a product that doesn’t appear to exist – but it looks very familiar. Australian authorities are now investigating whether the racing group’s uniforms and livery could be in breach of tobacco advertising bans by promoting multinational cigarette maker Philip Morris International.

The investigation, just a month out from the 2019 Melbourne Grand Prix, comes as the federal government reviews its tobacco control laws, including advertising regulation. Philip Morris has had a lucrative sponsorship deal with Ferrari for decades, with the famous red and white livery on Ferrari’s racing cars, uniforms and advertising historically featuring the Marlboro cigarette logo. The new branding featuring a white chevron on on a red background – is said by some to be reminiscent of the Marlboro logo.

Since 2007, strict controls on tobacco advertising worldwide have led to the gradual removal of the branding, and the F1 team formally dropped the “Marlboro” from Ferrari cars and uniforms in 2011. But suspicions were raised at the 2018 Japanese Grand Prix in October that Philip Morris was trying to keep its branding in the public eye – despite the formal bans on tobacco advertising. At that event, Ferrari’s cars raced emblazoned with a new logo sponsored by Philip Morris, called Mission Winnow.

The Mission Winnow logo is long, and reminiscent of a cigarette. The chevron on its tip is similar to the Marlboro logo. Its website suggests Mission Winnow is predominantly a brand revamp for the tobacco company, featuring gushing prose about innovation, excellence, and “innovative solutions to long-standing problems”. 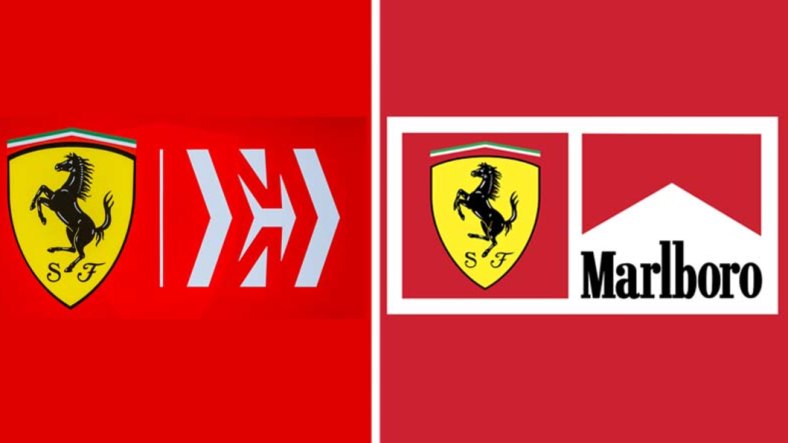 It doesn’t specifically mention tobacco products, but it does promote Philip Morris’ efforts to transform “not only our company but an entire industry for the 1.1 billion people who smoke and those around them”. This, it says, can be realised through the creation of “smoke-free alternatives” to cigarettes, which the company is testing in the laboratory.

On its website, under frequently asked questions, it rhetorically asks: “I just don’t understand how this is allowed. Isn’t tobacco advertising banned in sport?” It answers: “The tobacco industry is a highly regulated space, and we always respect the laws that apply to our activities. This campaign is no different and respects all applicable laws, including those around the advertising and promotion of tobacco products, for example. The campaign does not advertise or promote any branded products.”

Melbourne surgeon and anti-smoking campaigner John Cunningham, who complained about the new branding to authorities, said it was “spin”: “This website actually makes it much clearer what they are trying to achieve, and what sort of business they are in,” Dr Cunningham said – “It has nothing to do with F1 cars, that’s for sure. Tobacco companies are finally admitting that their only means of financial survival is to get people addicted to nicotine, and they’re going to pour money into researching how to do that most effectively — not for the benefit of their addicted customers, but for the benefit of their profits and shareholders.”

Philip Morris and Ferrari removed the controversial “barcode” design on Ferrari logos in 2010, after an international outcry that the logos constituted subliminal tobacco advertising.